The Golden Warrior: Kazakh symbol of independence, prosperity and heritage For countries around the world, their independence is very symbolic and an inspiration of pride to its people. The symbol of independence is reflected in a monument. These monuments can be an incredible structure, an important figurehead, or even something from the heavens like a god. France has the Arc de Triomphe, India has a statue of Ghandi, Mexico has the goddess Nike holding a laurel wreath, and the United States has the Statue of Liberty. However, Kazakhstan has a very intriguing national icon that symbolizes its independence, but is a reflection of its prosperity, heritage and Kazakh patriotism. 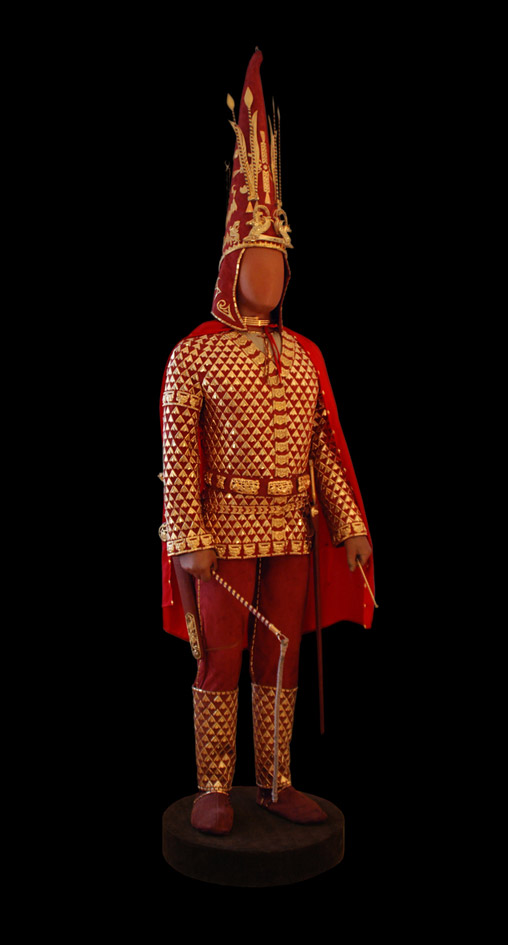 In Independence Square in Almaty is the national monument symbolizing Kazakhstan’s independence and identity. The reason why it’s in Almaty is to remind visitors that Kazakhstan’s capital city was Almaty until 1997 before it was moved to Astana. The monument is a 91 foot pillar and on top is a winged snow leopard known in Kazakh folklore as barys. On top of the barys is the “Golden Man” or “Golden Warrior”. The story behind “Golden Warrior” is very interesting.

The Golden Warrior, also known as Zolotoi Chelovek (Russian) or Altan Adam (Kazakh), is a statue of a Scythian warrior recovered from a kurgan, or burial mound, some 70 kilometers from Almaty in Issyk in 1969. In this burial mound, a skeleton was found and its believed to have been an 18 year old Scythian warrior prince dating back to the 3rd or 2nd century BCE.

The Scythians were a nomadic tribal people that inhabited the Pontic-Caspian steppe and described in Herodotus’ The Histories. While the Scythian people disappeared from history with the rise of the Kipchak Turks the territory that is in Northern Mongolia.

The Golden Warrior was discovered wearing a gold-platted uniform, along with a gold dagger and sword, and a pointed headdress with plaques of winged horses with horns, panthers, goats, among other animals. As is typical of burying rituals, the Golden Warrior’s kurgan included ceramic vessels, bronze castings and jewelry. The warrior was probably a member of the elite, given the luxuries of the kurgan and the elaborate headdress.

With the skeleton, the burial mound included warrior tools, horse skeletons, jewelry, and more clothing stitched with gold. The actual garments are on display in Almaty at the Central State Museum and some artifacts were on display at the Nomads and Network exhibitions in New York City and Washington, DC. This person soon became a symbol of Kazakhstan’s past and heritage leading to the nickname “Golden Man”. Golden Man has become an icon to the history and people of Kazakhstan.

On the front lawn of the Embassy of the republic of Kazakhstan in Washington D.C. stands the national symbol: The Golden Warrior.

The Washington D.C. statue, commemorated in 2006, is a replica of The Golden Warrior featured in the Independence Monument in the Republic square, located in downtown Almaty, pictured below. The Golden Warrior is flanked on top of a pillar and at its base, is a book that represents the Constitution of Kazakhstan. The handprint of a wise man is engraved in the book and all who visit the site are encouraged to place their hand in the imprint and make a wish. Bronze panels of scenes from Kazakhstan’s history enclose the monument along with figurines in traditional Kazakh attire.

Unlike the Golden Warrior statue at Independence Monument in Almaty, the one out front the embassy is gold colored instead of only bits and pieces of the Almaty monument.

There is also some mysticism behind the monument as well. While it is a popular tourist attraction in Almaty and can be seen far and wide, the many people believe it has what made the country what it is today and so successful. Many people, more importantly newlyweds, will come to the monument to touch it and leave flowers. The legend goes that the power of happiness from Golden Warrior that has helped make Kazakhstan prosperous will channel through you to enrich your life of happiness and prosperity. The rule is you can only touch it once.

If you look around Kazakhstan, the barys, like on the statue, is seen as symbol used on beer labels and is even the mascot of the Astana hockey team. Barys are important to Kazakhstan because they are seen as symbol of rapid growth, just like Asian tigers connote the dynamic growth of East Asian economies. This role of Barys is also mentioned in the previous long term Kazakhstan 2030 Strategy.

So what is so significant about this archaeological discovery? Why is The Golden Warrior the symbol of the Republic of Kazakhstan?

First, the Golden Warrior represents the history of the tribal peoples who inhabited the Kipchak steppe and practiced a form of pastoral-nomadic food producing economy prior to Russian Imperial rule and the October 1917 revolution. As nomadic peoples, they left few written records. Historians rely on archaeological evidence, such as kurgans, and secondary sources written by their contemporaries, such as Herodotus’ The Histories, to study the civilizations of antiquity. Thus, the discovery of The Golden Warrior provides additional evidence for the study of pre-modern tribal peoples.

For Kazakhstan’s leaders, the Golden Warrior is a rich example of a historical artifact pre-dating Russian Imperial rule and provides insights into the history of Kazakhstan. Even though the Scythians pre-dated the Turkic peoples, having inhabited the territory of modern-day Kazakhstan, the Scythians are an important component of Kazakhstani history.

Additionally, the Golden Warrior provides evidence in support of Herodotus’ writings. For example, the Golden Warrior’s headdress, a towering 70 cm, is believed to represent the antlers of a reindeer. In The Histories, Herodotus describes the Scythian (Saka) tribes as “those who wear pointy hats.”

The legacy of animal style objects is evident in contemporary Kazakh art. The curvilinear ornament pattern evident in Kazakh textiles, first appeared in the Upper Paleolithic era. It is believed that the dynamic, circular pattern of the Kazakh ornament symoolizes features in nature such as the sun, mountains and the curved horns of animals.