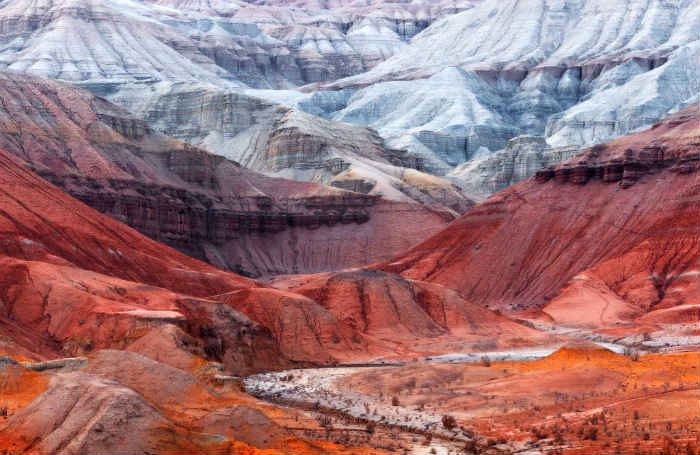 While the Kazakh wilderness is usually associated with horses and steppes, it is also the land of the famous singing sand dunes, forests, mountains and rare animals on land almost twice the size of Luxemburg. Altyn Emel National Park is an expanse approximately 260 kilometres north of Almaty.

The government made the land a national park on April 10, 1996 to preserve its pristine nature and biodiversity, as well as archaeological and historical monuments. Altyn Emel is the largest reserve in Kazakhstan and part of the United Nations Educational, Scientific and Cultural Organisation’s (UNESCO) world heritage.

Southern Kazakhstan is rich in eco-tourism destinations that remind visitors of scenery from science fiction movies. The colourful clay mountains with white, red and orange bands lying horizontally across the Aktau Mountain range provide such views. Palaeontologists discovered 56 species of Early Miocene flora such as spruce, birch, alder, linden and ailanthus in the mountains, as well as remains of ancient animals like crocodiles, turtles and giant rhinos with an estimated age of 25-30 million years, writes caravanistan.com.

The Altyn Emel steppes change to singing sand dunes approximately 1.5 kilometres long and up to 120 metres in height. When the west wind disperses the sand, the desert “sings” with a sound similar to an organ. Scientists suggest friction electrifies the sand in dry hot weather to create the mysterious vibration.

Altyn Emel flora has nearly 1,800 species, 21 of which are listed in the Red Book. As for fauna, 260 species live in the park, 56 of them considered rare. The park is home to endangered amphibians such as the Siberian toad and rare and endangered birds like the black stork and imperial eagle. The Red Book includes mammals such as manul, gazelle, argali, lynx and Tien Shan brown bear. Thus, most sightings are from a distance.