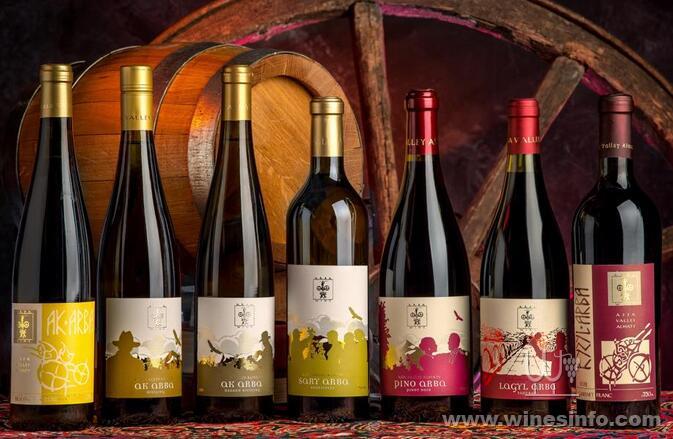 When people talk about wine, countries that instantly come to mind are France, Italy, Spain, Australia, Chile, and even the United States. While most of these countries are giant producers of wine, Kazakhstan has a very small wine industry that is slowly growing and gaining mass appeal. Even though it’s slightly growing, there is much potential especially since Kazakhstan has been making and enjoying wine for over 1,300 years. So grab a glass of your favorite vino and enjoy reading about Kazakhstan wine.

Kazakhstan has been enjoying wine for over 1,300 years. The origin of Kazakhstan making wine dates all the way back to the 7th century AD. Archaeological evidence shows that around that time, traders from China and Uzbekistan introduced viticulture (that’s wine-making) around the present-day city of Shymkent. Over time, viticulture spread to places like Atyrau, Aktobe, Taraz, Issyk, and even Almaty; near the foothills of the Tian Shan mountains. But it wasn’t until the rise of the Soviet Union was when modern wine-making was brought to Kazakhstan. Before and after World War II, Josef Stalin was deporting people and sending them to remote places east of where they were originally located, like Kazakhstan. Some of these people who grew up in Georgia, Armenia, and the Caucuses making wine saw the landscape of Kazakhstan and realized they could take their wine-making skills and bring it to the steppes. These peasants and survivors were beginning the wine-making industry of Kazakhstan. By 1976 26 specialized vineyards were cultivating around 22,000 hectares of land, mainly in the south of Kazakhstan. Funny though, this small industry was not know outside of the Kazakhstan SSR state. It wouldn’t be known outside the state until 1987 when Soviet President Mikhail Gorbachev visited these vineyards. Claiming himself as a wine connoisseur, he was surprised to learn these local vineyards made some amazingly tasty wines. When the Soviet Union fell, the interest by Gorbachev renewed interest in Kazakhstan wine and the newly formed Russia became a big trading partner. Since then, the wine industry has been growing gradually with people taking an interest in having the “Sun in a glass.”

Today, the Kazakhstan wine industry has shrunk with some of the vineyards during the Soviet Union going under. The total area of land used to make wine has nearly halved from 22,000 to about 13,000 hectares with only a few wineries in operation. For people in Kazakhstan, 80% of wine that is consumed is imported while the other 20% is locally made. Within that twenty percent, there are three major vineyard that each hold an extraordinary characteristic about themselves. The first one that is well known in Kazakhstan is Issyk Winery which lies about 25 miles outside of Almaty.

Issyk Winery controls 80% of sales of Kazakhstan wine, or in other words, they control 16% of the total wine market in Kazakhstan. Issyk Winery has become the role model company for making wine in Kazakhstan. Making wine for over 16 years, they were bought by Swiss based Consulting Group in 1996. With the purchase, wine experts from Italy and Australia introduced “new world” technology to the winery. Until recently, Issyk Winery is now under local ownership by Dostar which owns, makes, and distributes alcoholic beverages in Kazakhstan. But technology has not been the only advantage for them; the other advantage has been the location.

Issyk Winery sits 850m above sea level in the Tian Shan mountains where the grapes can receive much better sunlight and mountain air to help create high quality wine. Originally starting with sweet wine that was native to Georgia, Issyk Winery has expanded to making Sauvignon Blanc’s, Merlot, Cabernet, Cognacs, and other varieties to break into the international market. Issyk Winery has become the model vineyard that other companies have seen to learn “new world” techniques to make wine. Although, one winery has something that beats the rest.

Winnac is a modern wine-making enterprise that is relatively new in Kazakhstan starting in 2004. However, the man behind Winnac is not only their prized possession, but he is the “Elder Statesman of Kazakh Wine-making.”

Artur Karapetyan has 60 years of experience in wine-making under his belt. He came to Kazakhstan when his parents were deported from Armenia and dropped in the steppes to fend for themselves by Josef Stalin in the late 1930’s. He grew up learning how to make wine and would later head the wine companies that were state owned during the Soviet Union. Don’t think that Artur is just known in Kazakhstan, he’s internationally renown; winning the Association of French Winemakers Golden SPI medal in 2001 and the coveted Napoleon Medal in 2003. With his impeccable taste for wine, he has taken the company far winning gold and silver medals at international wine festivals. Winnac today makes four different sparkling wines, 22 different wines, 5 different cognacs, four non-alcoholic beverages, and three types of chacha (a vodka wine). Artur Karapetyan’s talent and experience has put his company and Kazakhstan on the wine map.

Finally, the best known winery to visitors of Kazakhstan is Bacchus, named after the Roman god of wine. Bacchus is the oldest vineyard in the country beginning in 1948 in Almaty. However besides being the oldest, it is the fastest growing vineyard. In 1950, it made 5,000 bottles of champagne to commemorate the 30th anniversary of the Kazakh SSR. In two years after that it was making 300,000 bottles of champagne, which is very impressive. Today, Bacchus has a state of the art facility that makes 80 different beverages from wine, to sparkling water, vodka, champagne, and more notably cognac. Their cognac is their signature drink that most tourists take home to remember their trip. The technology has helped them make these varieties and mass produce to expand their market. However, with all their technology and growth, they have not forgotten what is at their core that makes Kazakhstan such a great place: their hospitality is like no other where they make you feel like a member of their family. If you’re in Almaty, stop by Bacchus, enjoy a glass of wine, visit their store to take a bottle home, and be a part of their growing family.

For centuries, wine has been made and enjoyed in Kazakhstan. Even though most of the country drinks wine from outside the country, the wine-making industry in Kazakhstan is growing and has impressed people at wine festivals, including a former Soviet president. With this “cottage” industry, people from places like the United States and New Zealand are moving their vineyards to Kazakhstan even. No doubt that soon people around the world will be enjoying a glass wine made from grapes grown on the Kazakhstan steppes and a chance at sipping the sun in a glass.